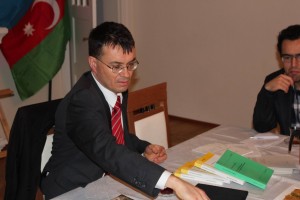 So it came to the next meeting in the Azerbaijani House in the framework of the Talk&Cay Program. This time our guest Michael Reinhard Hess. He is a turkologist and researcher of the Azerbaijani poet   Imameddin Nesimi. According to Hess, Nesimi has been honoured by the Azerbaijani as one of the most significant poet. Thus, it was not surprizing that Nesimi was the main topic of the evening. Nesimi represented hurufism – a religious doctrine well-known on the territories of Caspian Sea, Middle East and Central Asia. Michael Hess referred to Nesimi’s poetic style.  „It is typical for his works that poetic and rhetoric brilliance is combined with religious emotion expressed directly from the poet’s soul… Nobody else in Turkish poetry could reach that mastering of the artistic means… Nesimi created at the same level as Hafez, one of the most popular Persian poets of his time.

To Michael Hess’s regret, Nesimi is hardly known by the western audience. There are very few studies about his works. Contrary to this, Rumi is much more familiar. According to Hess, Rumi’s works are easier to interpret. The poems of Nesimi are more complex, thus, more profound.

Additionally, the Nesimi researcher cited some Turkish poets, such as Yunus Emre, in order to show the emotionality, depth and passion of the Turk origin poetry. 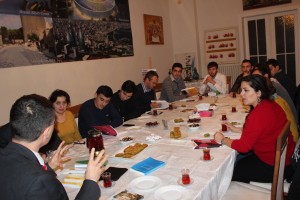 During the meeting a few words were mentioned about Bodenstedt. The writer Friedrich

von Bodenstedt got acquainted with the Azerbaijani poet Mirza Schaffy (Mirzə Şəfi Vazeh) in Tiflis . In 1851 he published the book „Songs of Mirza-Schaffy“, which became a best-seller. However, it has been found out that the poems had originated not from Mirza-Schaffy, but Bodenstedt himself.

During the meeting black tee and Turkish Baklava were served. The profound knowledge of Mr. Hess impressed the guests.

We thank our guest Michael Hess for this nice get-together and hope to meet him again in the future. 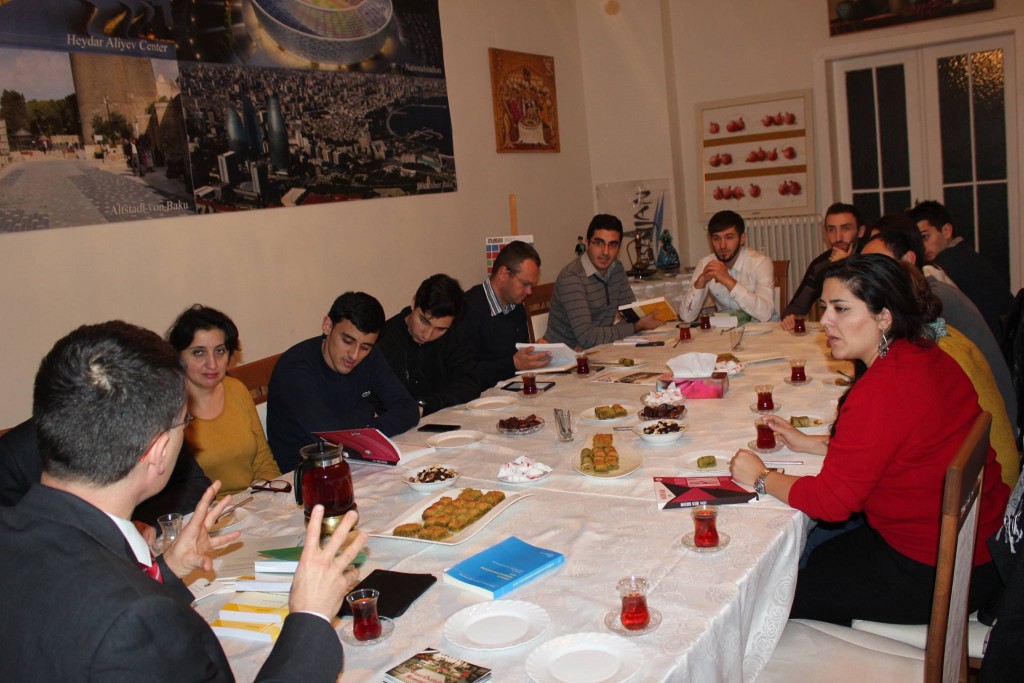