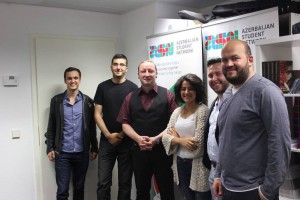 On 10th of July 2015, within the project “Talk & Cay” Heiko Langner visited ASN office in Berlin. Mr. Langner is a political researcher, working as research assistant for Katrin Kunert at the Left-Party (der Linken), who has been focusing his surveys for many years on the Caucasian region. One of his recent books “Krisenzone Südkaukausus: Berg Karabach, Abchasien und Südossetien im Spannungsfeld von Identität, Völkerrecht und geopolitischen Interessen” points out the ongoing circumstances occurring in the region. During the held discussion, Mr. Langner has revealed some of the core reasons concerning the Nagorno-Karabakh conflict and suggested alternative options in decision of this long-lasting problem. 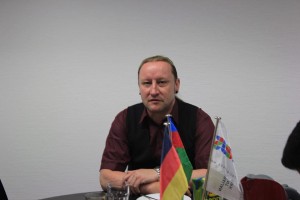 The held debates have been attended by ASN members as well as Representatives of Jewish Student Centre with questions referred to the actual situation in the South Caucasus.

Next, Heiko Langner has underlined the importance of the First European Games not only for Azerbaijan but for the whole world. “The European Games have reflected the great potential of the young country like Azerbaijan, and increased its cultural attractiveness for thousands of tourists”, said Langner.

Further, Heiko Langner has mentioned that the critics against Azerbaijan during the European Games was, to some extent, justified due to some controversial issues. Nevertheless, following the same logic, the USA should have been criticized for the hosted Olympic Games because of gaps in their legislation either.

In addition, Mr. Langner has talked about the German-Azerbaijani relationship. He has stated that relationship between two partner countries has been significantly improved compared to the previous years. “Azerbaijan is the one of the most important energy suppliers to Germany and entire Europe”, mentioned Langner.

At the end, Mr. Langner has listed the main points, which can play significant role in the solution of the Nagorno-Karabakh conflict:

1. The Nagorno-Karabakh conflict is very sophisticated problem, but it is possible to find a solution.

2. The process of solution seems to be very long, hence, both countries should meet halfway.

3. Armenia must permit visits to the occupied area for IDPs (Internally Displaced Persons).

4. Both countries must eliminate the enemy and aggressive behaviour towards each other.

5. The IDPs should be returned to their hometowns.

Afterwards, ASN team has thanked Mr. Langner for his visit and participation in such interesting debates, and gifted him a book about the ancient Azerbaijani town – Shusha.

In the future, ASN is going to invite other guests from the political and cultural fields, in order to discuss the different important issues in our comfortable office in Berlin. 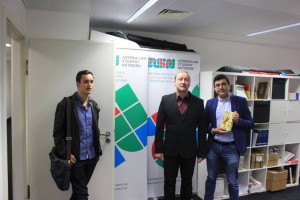