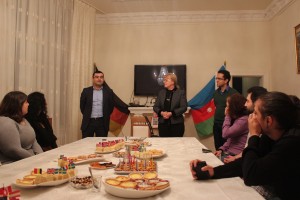 As a next round of “Talk&Cay”, organized by Azerbaijan Student Network, Prof. Dr. Eva-Maria Auch was a guest in Azerbaijani house in Berlin after the first meeting with Heiko Langner. The main purpose of the round-table is to establish a cross-cultural and intellectual exchange in a relaxed atmosphere.

Eva-Maria Auch is a professor of “History of Azerbaijan” at the Institute of History at the Humboldt Universität zu Berlin and has completed Oriental studies in Baku. Exactly, this point was interesting for the guests as well. Needless to say, it was not typical for Germans to study in Baku during the Cold War. It was during 1974 when the Socialism was ubiquitous both in the USSR and East Germany.  Would it not have been easier to get used quickly to the life and situation in Baku? The answer is obviously not, since living environment was significantly different between Baku and Berlin. Mrs. Auch and two other German students have confronted different country, culture, customs and above all a different education system in the new city. Being from central European culture it was not an easy challenge for them, but still an important experience that shaped their future life. It was especially interesting to hear the description of life in a student dormitory which has housed the students and Ph.D. candidates from Asia, Africa and South America. Due to the fact that the knowledge of Arabic language was a prerequisite for oriental studies and many Arabic families resided in dormitory, it could have been possible to improve one’s Arabic language knowledge by talking with them. But it was not welcome to contact the non-socialist oriented nationalities or who were not allies at that time. As an alternative, there were occasional friendship evenings where the people were able to demonstrate friendship among various nationalities. 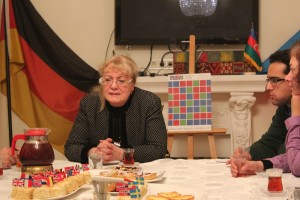 It was necessary to get adapted to the German reality after the studies have finished. Along with additional qualifications, specialization in Islamic Studies and East European history and doctorate were acquired. Nevertheless, the connection to Baku has never been cut. Followed by Nagorno-Karabakh Conflict and the reunification of Germany many academic autobiographies were destroyed. Several fellows like Uwe Halbach and Andreas Kappeler took courage to continue, although the deficient number of experts on Caucasus was obvious in reunified Germany. The interest was great. Among her academic career stations where she took the position of professor were the cities like Bonn, Düsseldorf, Hamburg, Bern, Giessen, Göttingen. Nevertheless, it was not easy to represent an objective position as a guest regarding the Nagorno-Karabakh conflict. Additionally, the academics have put forth extensive efforts since 1994 to establish an interdisciplinary teaching and research about Caucasus in Germany. But their efforts were not successful due to insufficient scientific political interest. In this respect Azerbaijani government’s initiatives to boost up a visiting professorship must be highly appreciated.

Currently the existence of the chair “The History of Azerbaijan” was extended for another five years and new projects are already planned. Nevertheless, it is required to establish an interdisciplinary competence center in order to keep the chair of Azerbaijan and Caucasus in force for a longer period. It will also bring Berlin and Germany wide regional knowledge together and encourage youth engagement. Caucasus is the part of the world that requires a more precise and extensive research. There are still plenty of research gaps and therefore much to do ahead. Therefore, Mrs. Auch has called the present students and Ph.D. candidates to present an active participation in further research. 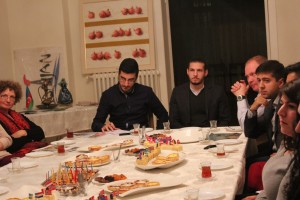 After the discussion the guests and Mrs. Auch were able to exchange ideas while having bashkirian sweets and black tea. We thank our guest for her participation in “Talk&Cay” round and our guests for their interesting questions.