About “The Swing of the Coffin Maker” Movie

Describing the complicated relationship between tough father and his mentally sick son, “The Swing of the Coffin Maker” movie is gathering various awards in different film festivals. Elman Imanov, the movie director, lives and works in Cologne, but the film is made in Azerbaijan – this fact makes it particularly interesting for us.

Elmar has told us what he wanted to achieve with this movie, what kind of issues he had during the shooting and how he wants to bring the movie to the public. He has also explained that Student Oscar is not a small thing. 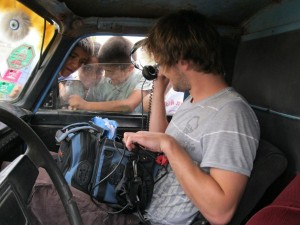 Your movie is really successful. How many awards have you got?

Seven… and four nominations. We’ve been to many film festivals – several here, in Germany, in France, China, India, USA… This is what I like in my job – traveling with the movie, meet with colleagues, exchange experiences. The last award was taken in February in the nomination for the best foreign movie in the festival of short films FFRESH in Wales. But I think the number of views speaks the most for the popularity of the movie, rather than any award.

But everybody talks about the Student Oscar, where your movie has won a bronze. I had no idea Oscar has this kind of a contest. Is it really a prestigious award? I am a little bit confused with the word “student”…

It is a student award, because each of leading film schools sends one thesis work. Last year we introduced IFS (International Film School), where we studied in Cologne. 51 movies from 29 countries were competing in the contest and we won the bronze. The organizer of the contest is the same American Academy Award.

Do you mean this movie is your thesis?

Yes, mine and my 3 fellow students: the operator, sound engineer and producer. Also, our team included other 5 people, who we took to Baku, and some local actors.

And instead of Oscars they give medals?

Yes, and a small prize, to celebrate with it later on. But if you are so confused with the Student Oscar, I can tell you that the movie also won the award of German Film Critics for the best short film. And in this award it is not only students participating, even though it is mainly them who is involved in short movies – approximately 70 per cent of all short movies are made by students.

And what is the practical use of Oscar award? Do you plan to shoot movies in States?

Well, independent movie, which I am busy with, is easier to shoot in Europe. Winning the award gives first of all important connections – for instance, producers start to track you. This can be useful if I decide to shoot in the States. Though, I have no plans in the US yet.

Tell us, how did you get the idea to make this film?

I was inspired by Chekhov’s story called “Rothschild’s Violin”, which is about the coffin maker living in a provincial town. Firstly we were thinking to move the story to Germany of early XX century, but later we decided to shoot in Azerbaijan. I always wanted to shoot there and we thought, why don’t we do it now? I thought it was important to underline some social conflicts, which we face on daily basis.

What is striking is the cold indifference of the father who realizes about the terminal illness of his son. It was disgusting how he almost started to bury his still alive son.

I believe that such people are able to express their feelings, care, love… On their own way, but they can. They are not hopeless in this sense… probably…

The key moment of the movie is the escape of the son. I thought he would not come back.

He ran away not from the father. The escape is the first independent decision in his life.

Washing in the water as a tribute to freedom?

Yes, if you want. 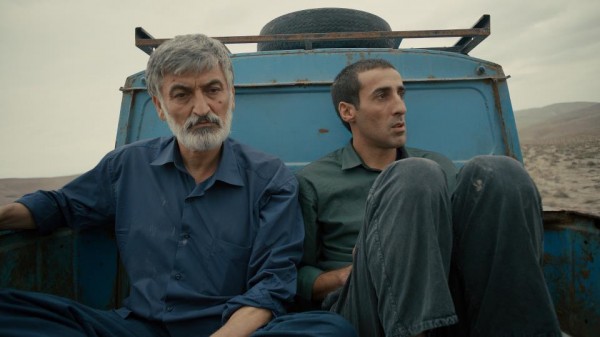 How did you find the main actors?

The coffin maker was played by Shamil Suleymanly, I have been working with him for a while. His son played Rasim Jafarov, who I met in Berlinale in Russian movie “The Missing”.

There are amazing landscapes in the movie. Is it Gobustan?

Yes. We traveled from Zagatala to Astara, looking for the right house. We needed an old house in the middle of nowhere. As it turned out, luckily, we don’t have many of these. Finally, we have found it 60 km away from Baku.

Did anybody live there?

Yes, a married couple. The husband was quite aggressive, as we noticed later. We agreed to shoot there during the week for a certain fee. Once, when we needed some rain we had to make some noise with hoses at night. As soon as we set everything up, he rushed out and began to shout at us angrily, demanding a silence to sleep.

I can imagine the thoughts of Germans…

I myself was shocked! But we managed to agree with him – we presented them a vacuum cleaner. But his wife was very kind. She cooked national meals for the movie. She cooked for the whole team, so everybody had some food.

Did you meet the deadlines?

Yes, we did. The shooting took 12 days, 7 of which were filmed indoors. However, while editing we destroyed some important parts with broken swings. That’s why I had to return to Baku with producer and reshoot this episode.

How much was your budget? Or is it a secret?

No, it is open information. Initially, the school allocated 12,000 euros for the thesis work. But this would not be enough, so we applied to the German Film Fund and received another 22,500. In addition, 4,000 euros were transferred to our account by our sponsor Bakcell.

The credits were given to the Ministry of Culture and Tourism of Azerbaijan.

Yes, they helped us very much with different permissions, licenses and etc. Without this the shooting would not be possible. They also let us use the equipment of Azerbaijan Film Studio, but it is quite old, so we used only stands. Like this we did not have to bring them from Germany.

How was the presentation of the film?

In Germany we have already had 15 screenings, and in Azerbaijan only three.

Of course, it is too few. I hope to organize more in summer. We will release the movie on DVD and it will be easier to go public. I want to travel with the movie in other cities of the country, not to concentrate in the capital. I want to see the reaction of the people, to listen their opinion, to discuss the topics, raised in the film. After all, the movie is not for critics and festivals, but for ordinary people. This movie talks about the life of ordinary people, that’s why I need their feedback.

Judging from the reviews in the Internet, the movie has received good feedback from critics and random viewers.

This is exactly what I wanted – to reach out everybody. I have noticed it during the first screening of the movie in our film school, when the mother of my classmate told me that the movie has touched her very much. I understood that I have reached what I was aiming at.

What are your impressions after working in Azerbaijan?

We all took it as an adventure. The guys lived in Akhmedly in order not to lose much time on the road, but they never complained about anything. As Germans are curious in general, they walked everywhere, filming everything on their way, they tasted many things. Of course, they had some minor problems, but in general all of them were satisfied with their trip.

Of course, you have got so many awards… When else will you film in Azerbaijan?

I have several ideas and I am still thinking about them. I cannot reveal the details yet, but I want to make a feature film. Let’s see what I can do.